No Result
View All Result

Charles Hoskinson Invites Dogecoin to Migrate to Cardano for Free

Cardano founder Charles Hoskinson says Dogecoin should become a Cardano sidechain and is willing to help the meme coin migrate free of charge.

Charles Hoskinson made this statement in response to a tweet asking about what would happen to Dogecoin after Elon Musk bought the social media platform Twitter.

According to Hoskinson, there is a possibility that DOGE will merge with Twitter. When asked whether the meme coin would be converted to a proof-of-stake network, he said:

“(Dogecoin) should be a Cardano sidechain. I’d do the migration for free. Hell, I’d even add smart contracts.”

This statement aligns with his earlier views that Cardano will be the network of blockchains with several sidechains connecting to it.

Elon Musk was largely responsible for the rise of the meme coin after promoting it in several tweets. He also made it a means of exchange for Tesla’s merchandise.

Before buying Twitter, there were reports that Elon Musk planned to support the application of Dogecoin on the social media platform. Speculation around a potential integration rises with his acquisition of the firm.

Although Tesla CEO Elon Musk has already made a few changes to Twitter, he is yet to announce his actual plans for the social media platform.

Since Elon Musk took control of Twitter, Dogecoin has rallied, gaining 44.3% in the last seven days and trading at $0.085692. DOGE bull rally is based on the anticipation of what Musk would do with Dogecoin now that he has control of Twitter. 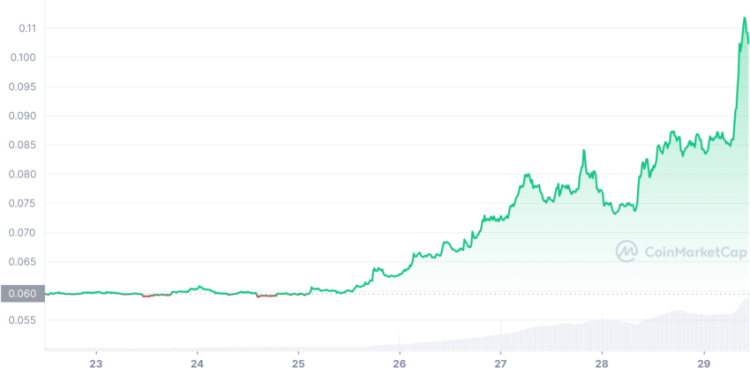 DOGE trading volume in the last 24 hours is $3.8 billion, showing many traders are currently buying into it. Its current rally has pushed it back into the top 10 cryptocurrencies by market cap.

Meanwhile, Cardano ADA is also up 5.2% in the last 24 hours and 16.1% in the past seven days. ADA has rallied following the broader market’s recent rise.

Dogecoin: This crucial core update will drive prices to the moon – Here are the details

Charles Hoskinson Invites Dogecoin to Migrate to Cardano for Free

Donate Dogecoin(DOGE) to this address

No Result
View All Result